Exposition « Charles Percier : Architecture and Design in an Age of Revolutions » 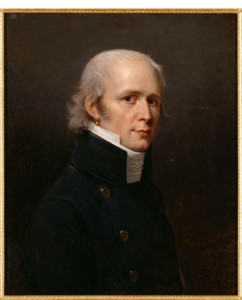 Curated by Jean-Philippe Garric, professor of history of architecture at the University of Paris I, Panthéon-Sorbonne and organized by Bard Graduate Center Gallery, the Réunion des Musées Nationaux—Grand Palais, and the château de Fontainebleau.

Charles Percier: Architecture and Design in an Age of Revolutions will be on view at château de Fontainebleau from March 18 to June 19, 2017.

Charles Percier: Architecture and Design in an Age of Revolutions will be the first large-scale exhibition to survey the magnificent range of projects undertaken by the French architect and interior designer from the end of the eighteenth to the beginning of the nineteenth century.

Although well known for his close collaboration with Pierre François Léonard Fontaine (1762–1853), this exhibition focuses primarily on the individual accomplishments of Charles Percier (1764–1838), whose commissions for public and private clients significantly influenced decorative arts and architecture during an extremely turbulent and rapidly changing period in French history.

Featuring over 130 objects from principal museums and cultural institutions in France and the United States, as well as key objects from private collections, the exhibition will include Percier’s designs for furniture, porcelain, metalwork, and the renovation of the rue de Rivoli—the construction of which transformed the center of Paris. Rare drawings and spectacular examples of early nineteenth-century cabinets, candelabras, and tureens will also be displayed. Examining his most seminal works, such as sketches for the arc du Carrousel, the interior designs for Josephine Bonaparte’s rooms at the Tuileries palace, and the magnificent books dedicated to Roman palaces and interior decoration, the exhibition will demonstrate the diverse and extraordinary creations of an artist whose work brilliantly bridged ancien régime court culture and the industrial production of the nineteenth and early twentieth centuries.

The catalogue accompanying the exhibition will be available in the Gallery and online at store.bgc.bard.edu.